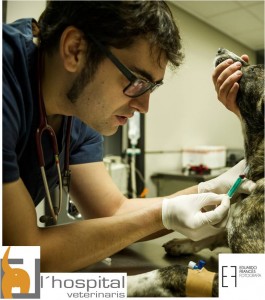 University CEU Cardenal Herrera in 2002, where he was doing an internship of the department of internal medicine during two years and of the service of ophthalmology during one year. When he finished his studies, he realized a formative stay, of one year, in the referral veterinarian hospital of Ars Veterinaria. Subsequently he worked as head of the hospitalization service of the Veterinary Teaching Hospital of the Universidad CEU Cardenal Herrera during one year and in the same period he realized the courses of doctorate. In 2006 he completed the postgraduate course in veterinarian ophthalmology in the Universitat Autònoma de Barcelona.

Such as the rest of the team of the L’Hospital Veterinaris, he maintains updated his knowledge attending several courses of formation, not only theoretical, but also practical, and also annual congresses. He has realized some stays with specialists of recognized prestige in the areas of dermatology, imaging and surgery, specialities which are the focus of his interest.

He has worked in several veterinarian hospitals, not only in the Comunidad Valenciana, but also in Cataluña and finally, in April 2008, he founded L’Hospital Veterinaris of Xàtiva with a lot of illusion and the aim of offering a veterinarian service of quality in the Comarca de la Costera. Nowadays, the group has grown with one more office, the Clínica Veterinaris of Moixent.